While we were waiting for the group to come back from Bay of Pigs (Baia des Porcos), as an admirer of birds I greatly enjoyed here looking at birds the young generations of which were practicing water diving (with unclear results) and the taking off from the surface. 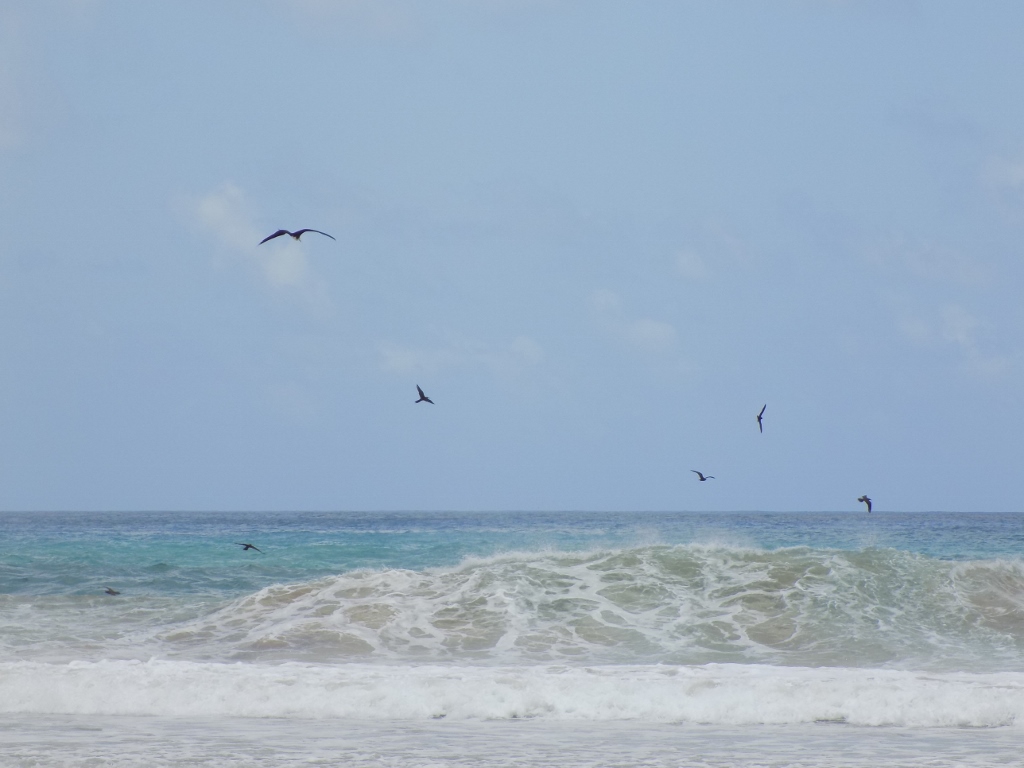 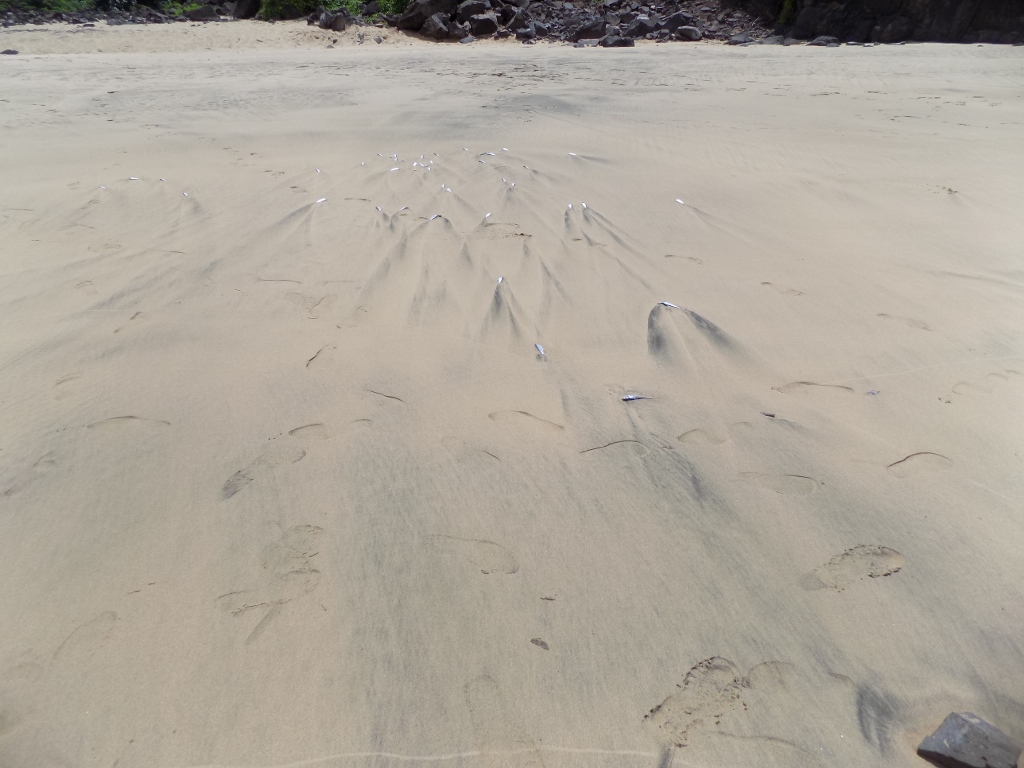 The frigatebirds’ practice field on Cacimba do Padre Beach

By the way, it is precisely one fantastic frigatebird, a male completely lost in its courting fervour that I took photo of many years ago in the Galapagos, that is in the introductory photo to my blog.

Now, with the experience, we waited for the whole group to gather before leaving the beach and then we all together went to Sueste Bay (Baia de Sueste).

Sueste Bay is rather wide and there were not many waves there, so the two of us finally took our snorkelling equipment with us. The bay is divided with plastic buoys into three sections – the middle one is for bathing and swimming while the two flanking ones are not intended for humans since there are different animals there including sea turtles that lay their eggs on different beaches of the island, not only on this one, in the period from December to June. There are also sharks, moray eels and Portuguese men o’ war. I wondered if the animals were also informed about this division of the beach and that they should not enter the part of the beach intended for the Homo sapiens.

Be as it may, Sneža and I boldly put on the snorkelling equipment and then ventured into completely murky and unattractively greenish-yellowish-brownish waters that ruled in the part of the bay intended for snorkelers. We headed into the unknown, since the guide continued not talking any language except Portuguese and tried even less to communicate with us even by using hands (when there’s a good will, this can really function). Still, we gave up very soon because it did not seem that one could see anything there. Perhaps it was possible a little farther, but I was in no mood to keep trying, so I simply returned to the shore, left my snorkelling equipment there and marched to the part of the beach still earmarked for the humans, but where water was transparent and of turquoise colour. There I could finally swim a little. In her life-vest that was mandatory for snorkelers, Sneža remained where I had left her and there she developed resistance to this beach because in addition to the murky waters where she was, there were also a few metres of seagrass that one had to go through in order to get out to the shore. A couple of days later I had difficulties persuading her to come back here.

While I was drying slowly, I enjoyed watching tropical birds. This time I succeeded in taking photos only of some boobies. They fly around here in quite a relaxed mode, low and close to humans. These were mostly young birds that practiced the technique of catching fish in the sea. They stay up in the air for a few moments, almost in one spot, observing the sea and what is in there, then they dive suddenly and like a sharp needle pierce the water, then they come up to the surface and fly up again, only to repeat the same thing again and again. 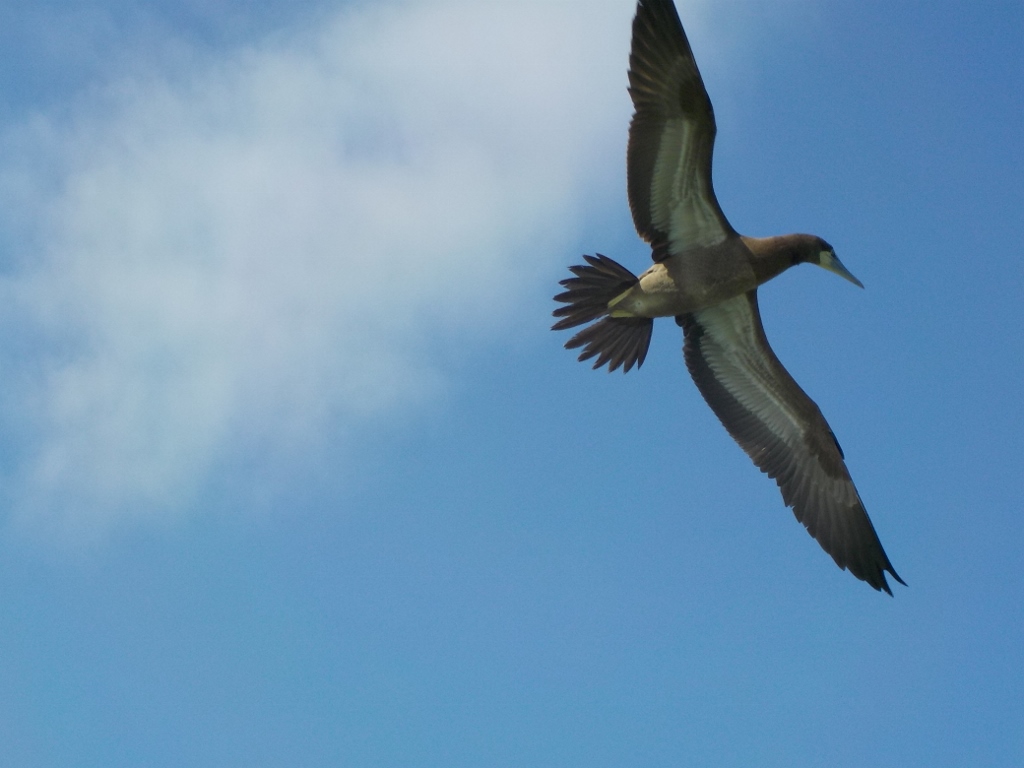 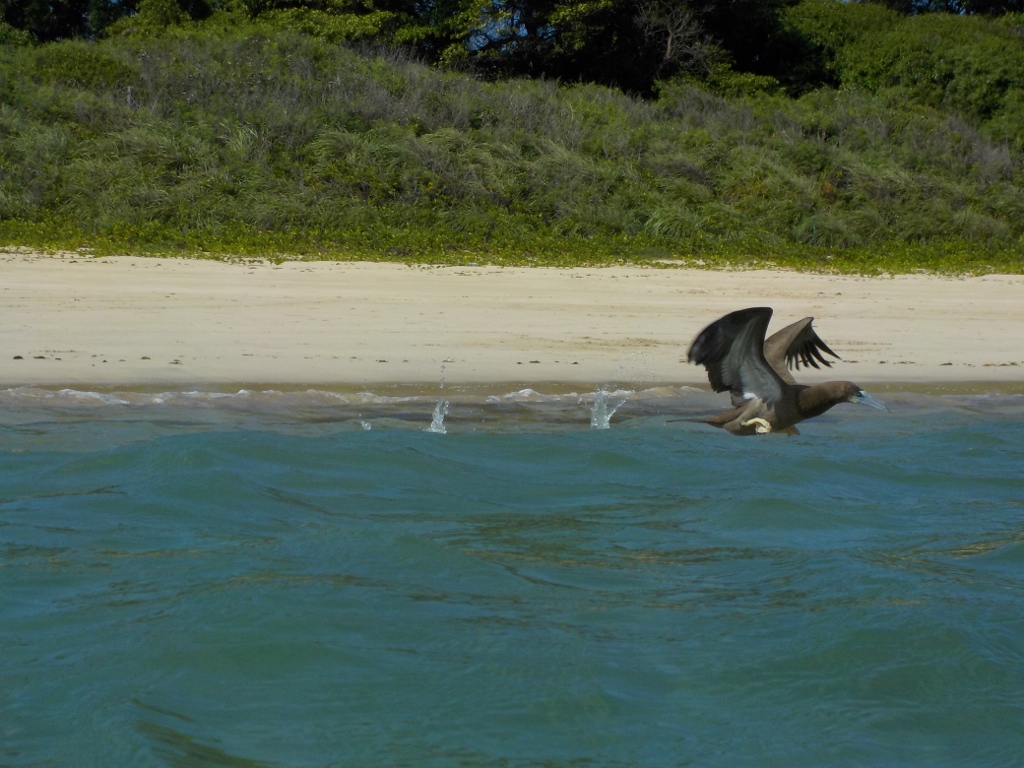 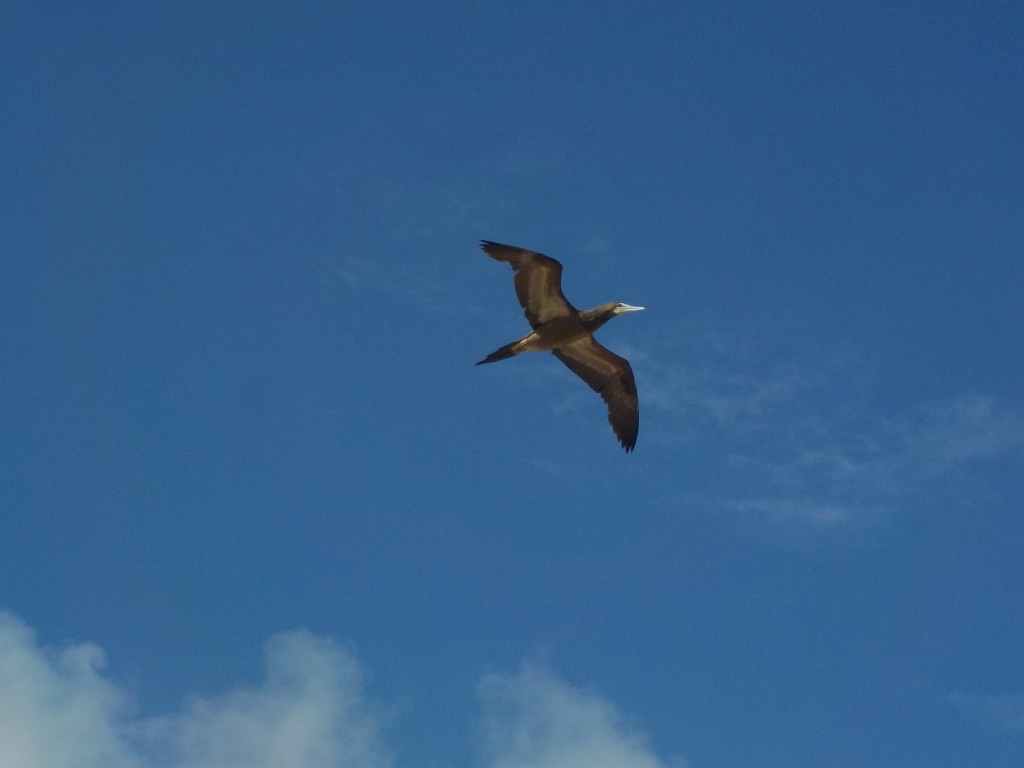 When we got completely dry and joined the rest of the group, we were taken by the vehicle to a promontory that constitutes one flank of Sueste Bay and there were some remains of a fortress that was used to oversee the bay. We were more interested to see for ourselves what was there to observe.

Side view at Sueste Bay

And then we went with the group to the other end of the island where we were to have a lunch break. I wanted to ask the guide something and he literally almost ran away, which made me mad and then I asked him to call the agency (there were a couple of girls who spoke English there). It turned out that an English-speaking guide was paid extra, just like the lunch. In other words, that day we actually paid only for a driver. We were both angry, but mostly at ourselves, since in fact we made the main mistake by not asking anything in advance and imagining the trip would be what we wanted it to be. That usually does not end well.

Eventually we ate quite well at the restaurant where we made the break and afterwards I walked around the surrounding area a little in order to take photos. 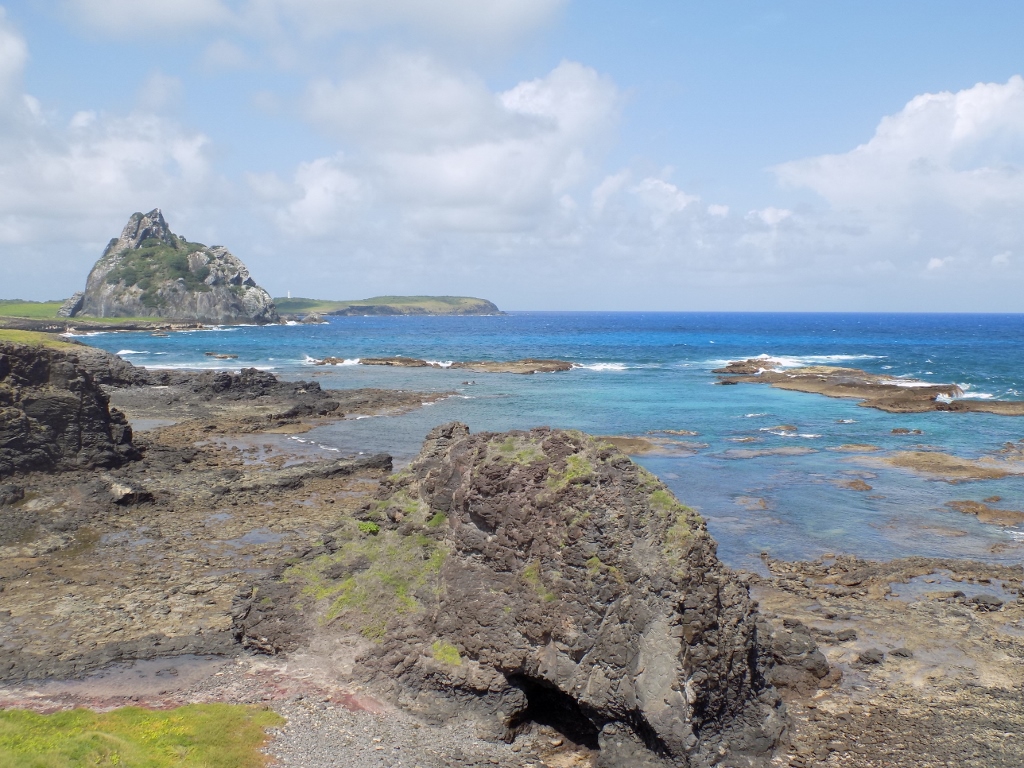 Caieira Cove (Enseada da Caieira), a tall rock called Morro do Pico is on the right-hand side

After the lunch we also went to Leão Beach (Praia do Leão) where we got half an hour. 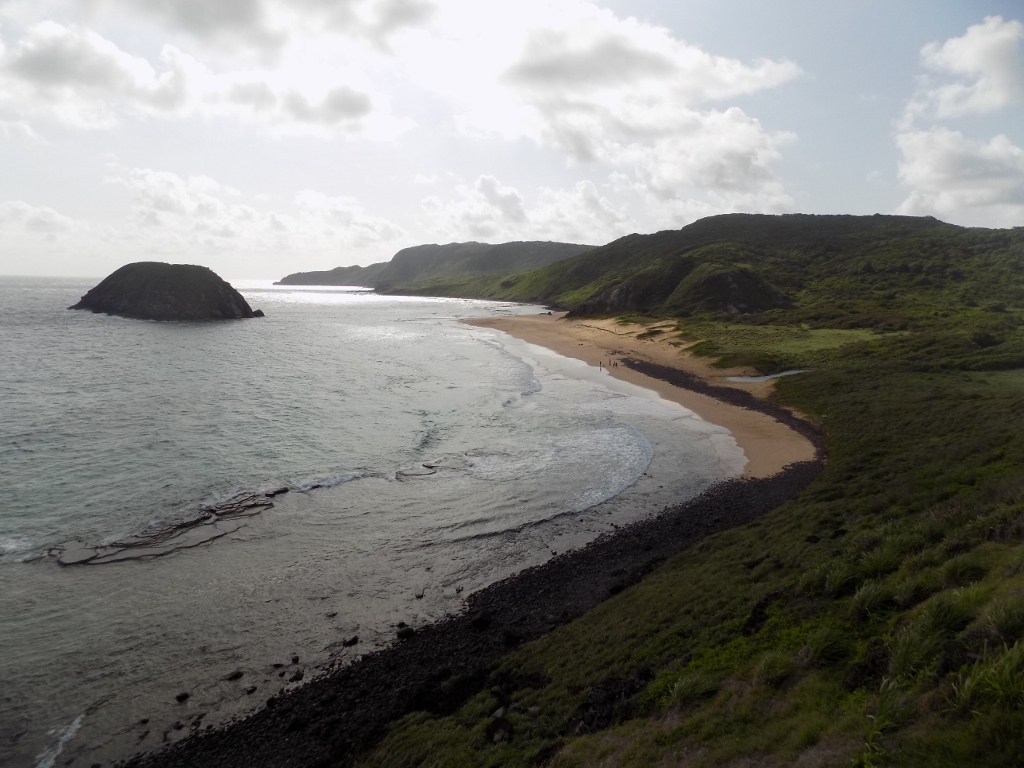 Across the beach there are two isles one of which has a silhouette that once upon a time reminded somebody of a lion, hence the name of the beach. I must say that it reminded me more of a hippopotamus (its rear end is too big for a lion), but nobody asked me to give the name to the beach. 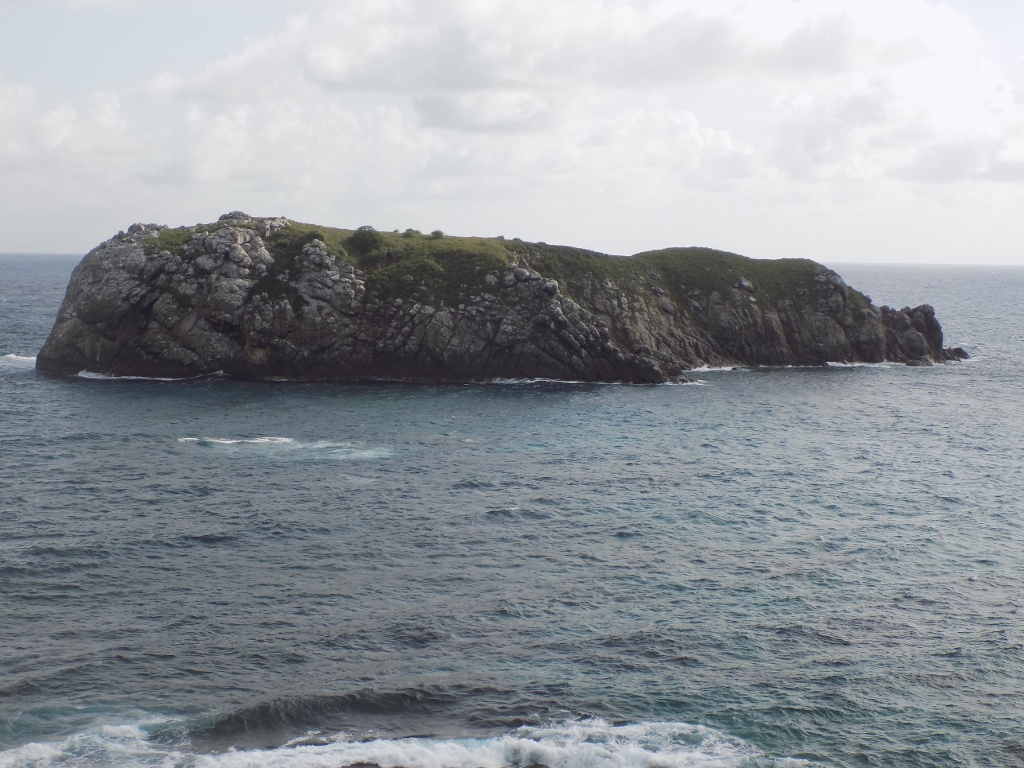 Hippopotamus on Leão Beach; according to me, the head is to the right

We used the time we got for the visit to this beach by going briefly to the shore itself where the beach consisted of wonderful light-coloured sand, but the waves were still very strong and big, so it only made sense for us to cool down a little, since no swimming was possible. 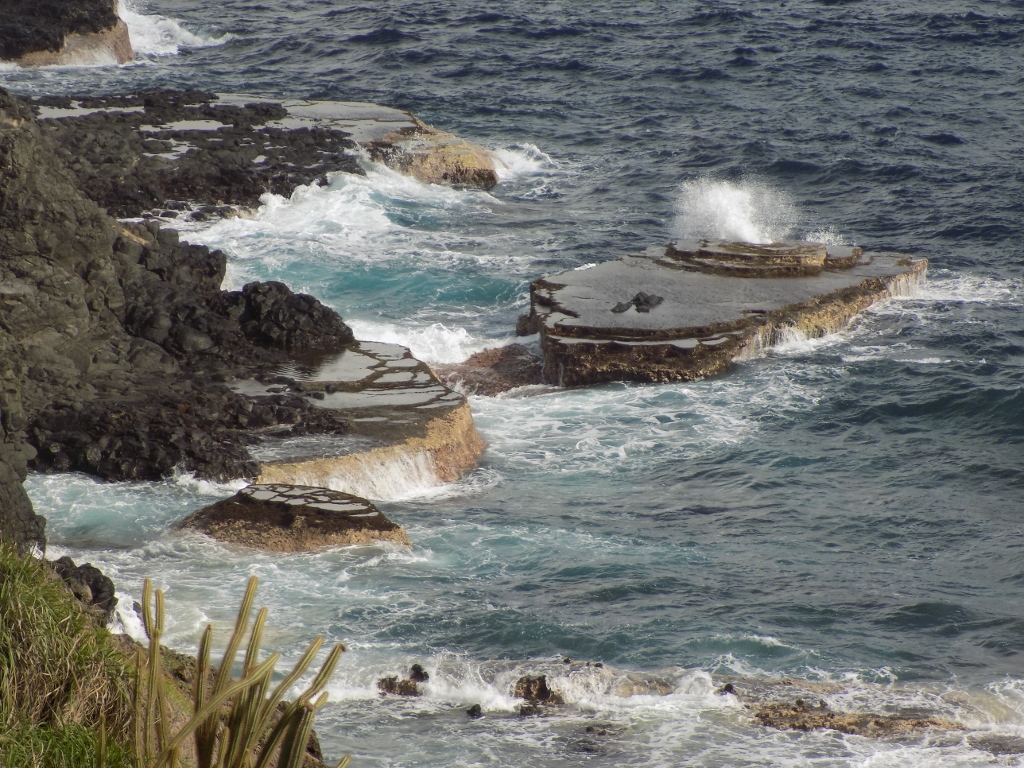 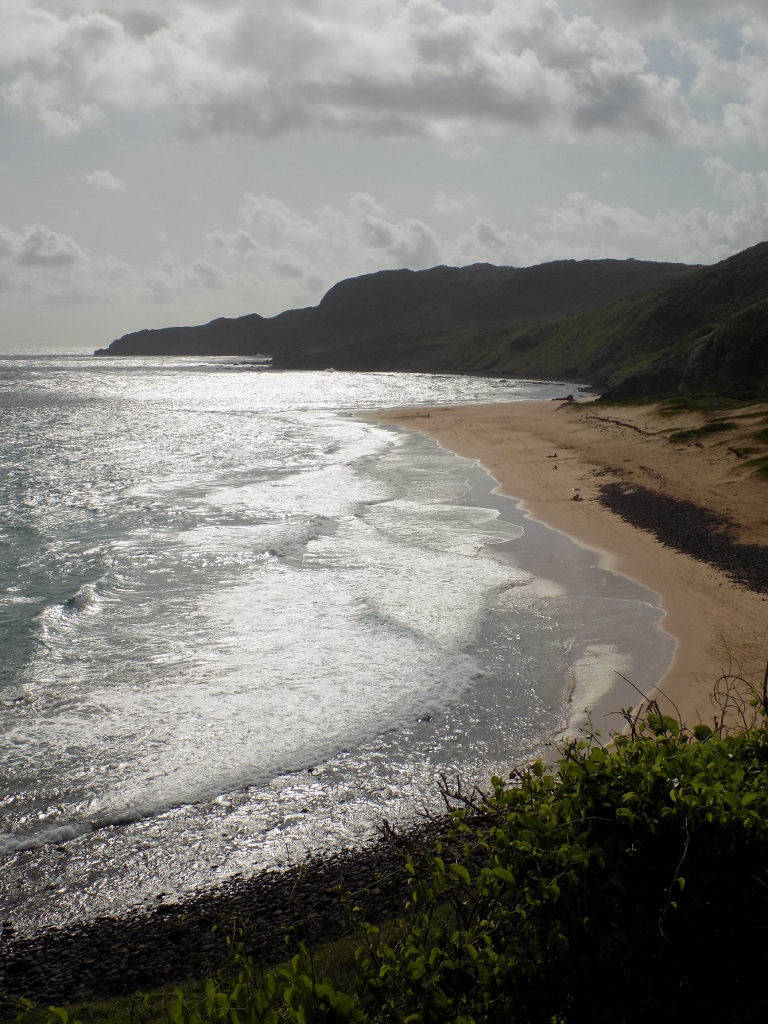 A few of us from the group that went down, now climbed back again and then we all together went to a viewpoint near Americano Beach (Praia do Americano) which is known as the place where the island sightseeing tours end in order to watch the sunset. 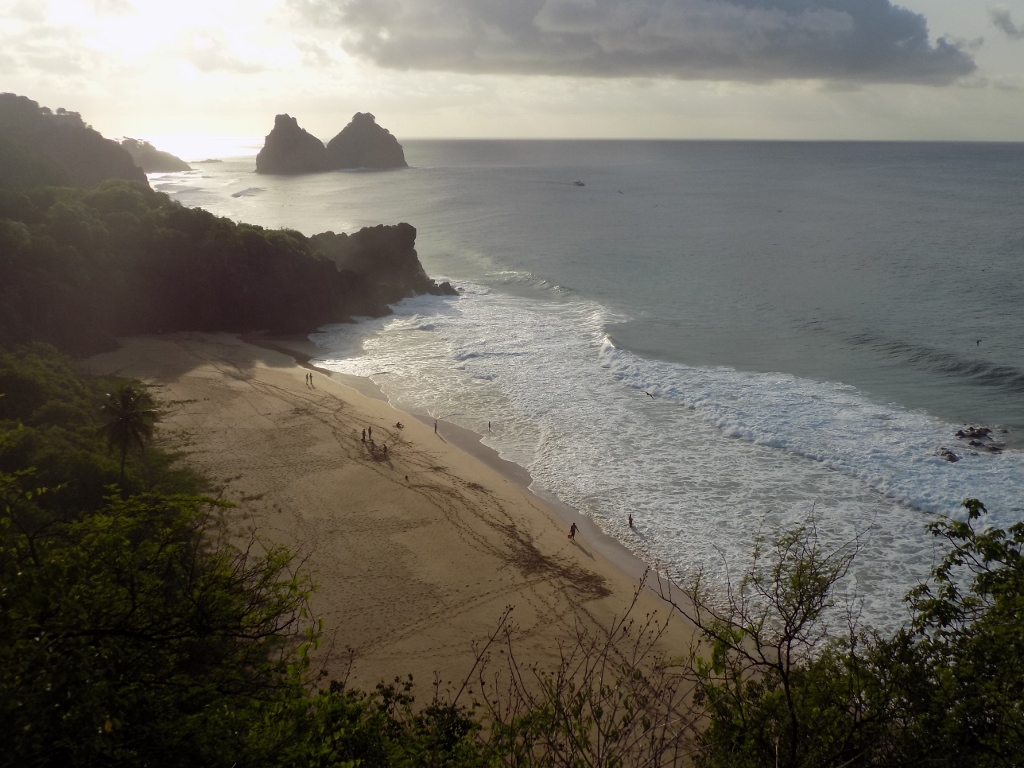 Although the place was nice and the setting Sun on the partially cloudy sky certainly rendered nice views, there was nothing spectacular there, but it was not bad either. We each found a nice spot to sit at and the whole thing took about an hour. 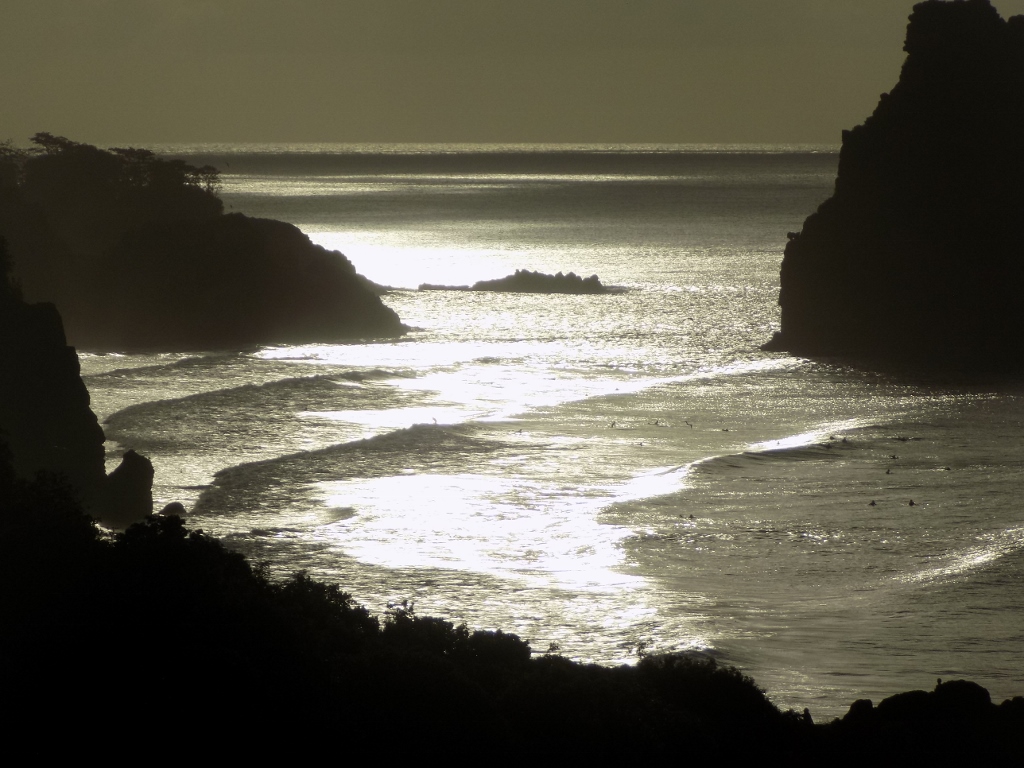 Looking in the same direction for about an hour, one starts to notice different things. Thus, for instance, I realised that in one part of the ocean’s waters I could see human heads and shoulders. It puzzled me little for a brief moment, since they did not seem to be swimming, but then I presumed that these were some surfers waiting for a good wave. As far as I could discern, while the Sun was getting closer to the horizon no good wave came for them. 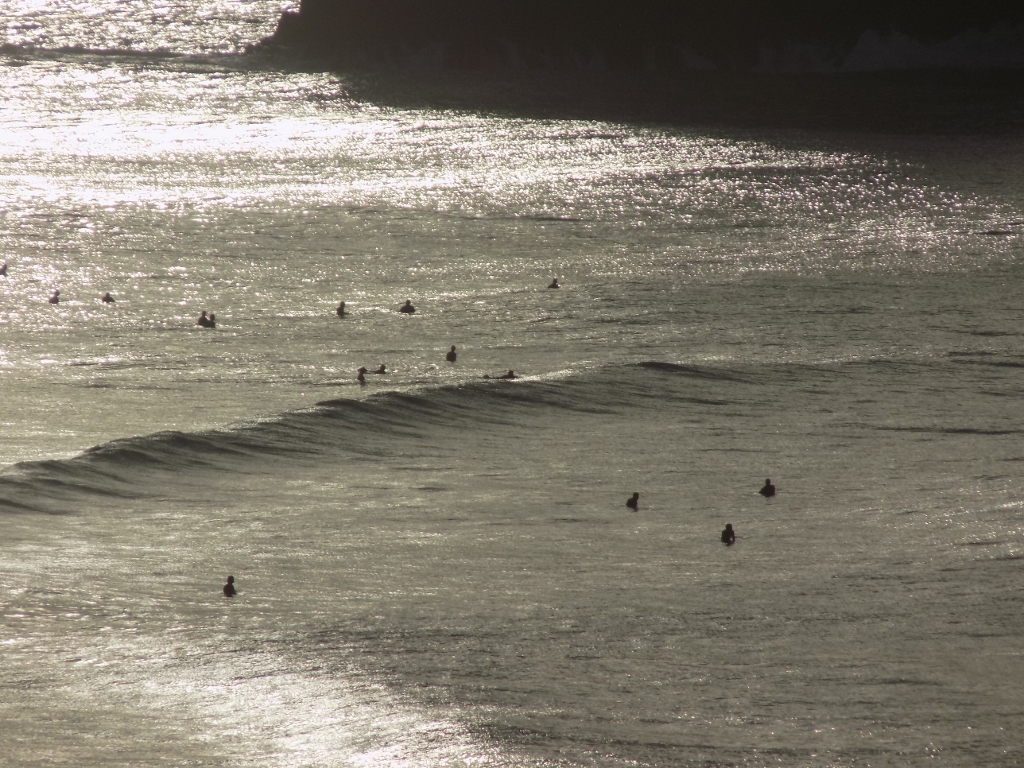 Everybody is waiting for something: we – for the Sun to set and surfers – for a good wave

Of course, as the Sun was coming down and the clouds occasionally covered it, there were some truly pretty sights. After all, I could either watch the sunset or the slope around me covered in visitors. 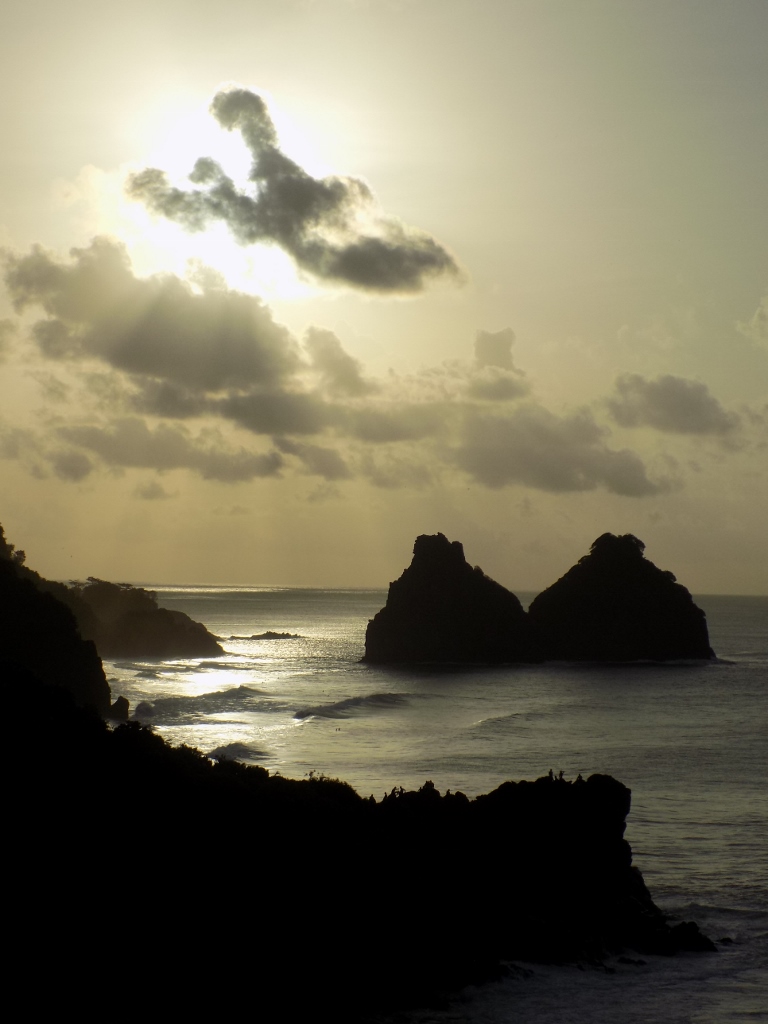 Waiting for the sunset 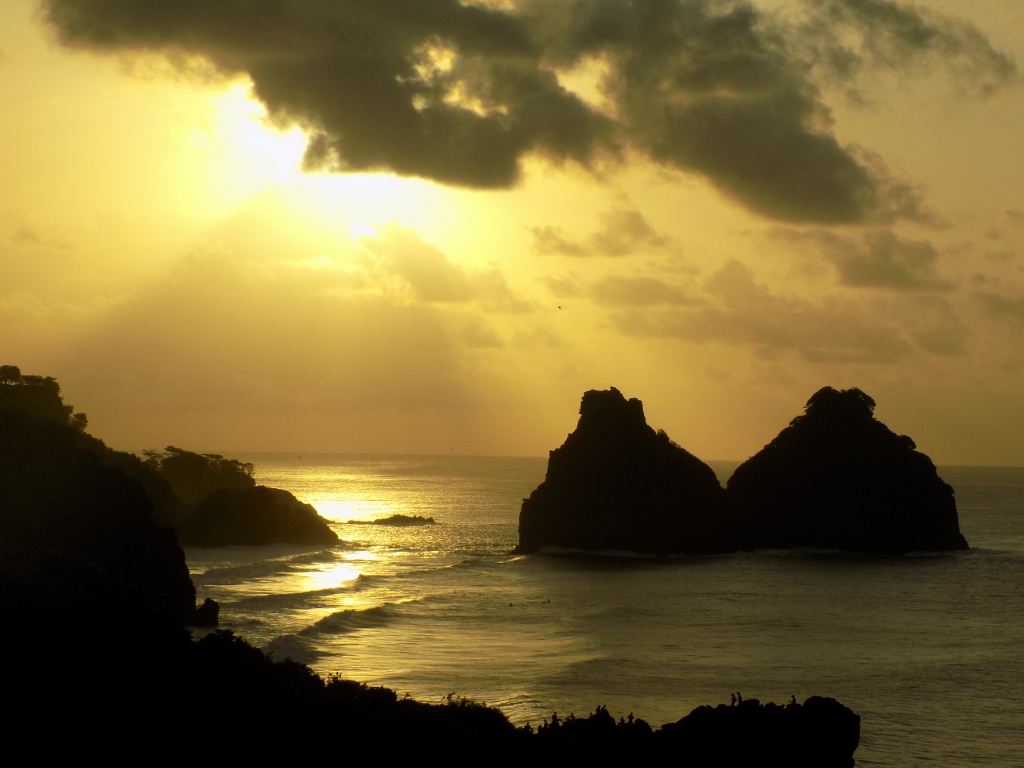 Waiting for the sunset

In the end we did not even see the formal setting of the Sun since clouds lingered along the horizon and the people sitting at the viewpoint started to leave already when the Sun got hidden by those clouds.

That was also the end of the day’s excursion and the only thing left was for the driver to take us to our B&B, which he did.

That evening we decided to go to a restaurant that was very close to the place where we had the room. Not only that the restaurant seemed attractive, but also we had noticed that a bunch of people waited to get a table there. Our conclusion was that this promised good food. And it was. We liked it so much that we went for dinner there on the remaining two nights of our stay on the island. And each time the food was excellent. 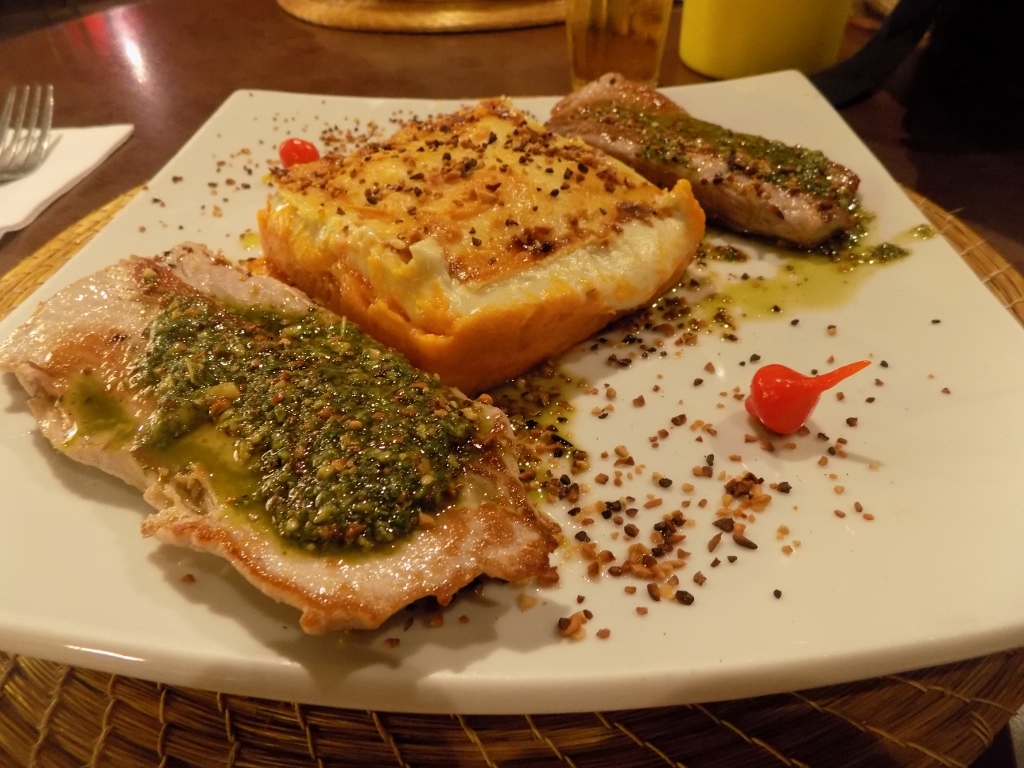 Dinner at a restaurant

If you go to the island of Fernando de Noronha, make sure that you eat at least once at the Restaurante Xica da Silva. I don’t think you will regret.

For the next day we thought of going on a boat tour, but in the meantime we both agreed it was not really an interesting excursion – as far as we understood it, you sail by boat on one side of the island for a couple of hours with one break for swimming. Taking into consideration our experience of the day before, we found it important to understand all the aspects of the tour, especially since some agents said the boat made a circle around the whole island, even going to smaller islets that belong to the archipelago. Perhaps there are agencies that organise this for advanced or professional scuba-divers or biologists, but it was certainly not possible to squeeze all of this into a couple of hours and this tour that was usual and standard for common visitors and tourists.

In any case, since we were supposed to wait to be picked up at the B&B and to return us there, it was clear to us we would waste too many hours in exchange for a dubious pleasure. This all seemed insufficient to sacrifice a part of the short time we were spending on the island.

By the way, as far as transportation is concerned, there is one main asphalt road on the island. It links the port in the north-east of the island and Sueste Bay (Baia de Sueste),), while also passing by the airport. There is even public transportation in the form of a small bus that runs every half an hour or an hour and connects two points with stops along the way and small detours to the “auxiliary” bus stops. However, during our short stay on the island, Sneža and I often used hitchhiking. This is absolutely not our regular practice during our journeys, but we had read that it was quite acceptable here and it also happened a couple of times that while we were standing and waiting at a bus stop, drivers stopped on their own and asked us if we wanted a lift.

As I’ve mentioned in my previous text, we wanted to go to Atalaia Beach, but it was necessary to make the booking beforehand and when I checked this, all the timeslots had already been taken up for days in advance. It was only after our visit to Sancho Bay (Baia do Sancho) that I started to grasp the system and what this was about. I presume that just like in the case of Sancho Bay, in the case of Atalaia beach, visitors are allowed to pass in alternating directions every half an hour, thus limiting their number. It is probably the local agencies that book these timeslots in advance and then there is no room for individual visitors.

For this reason we decided to head for Bode Beach (Praia do Bode) in our own arrangement. 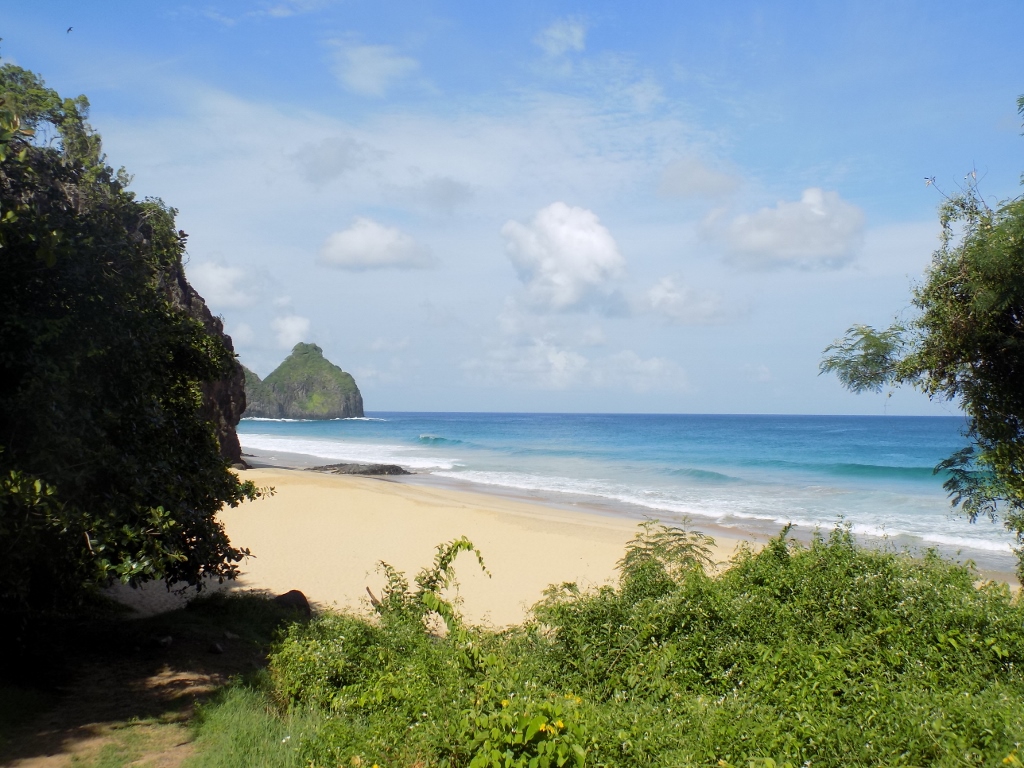 Getting to Bode Beach 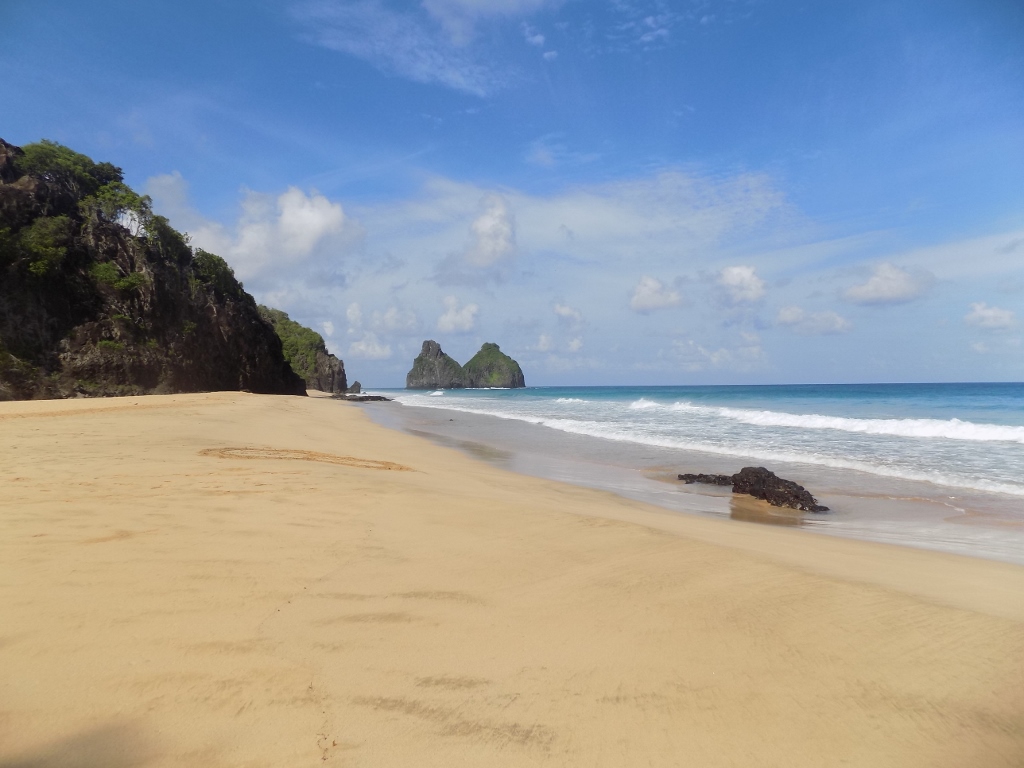 Bode Beach; in continuation Cacimba do Padre Beach and the Islands of Two Brothers

So, despite the limited number of visitors to the archipelago that is named after its biggest and the only…